The Ugyen Wangchuck Institute for Conservation and Environment Research (UWICER), situated at Lamai Goempa in Bumthang, was established in the year 2004 by the then Ministry of Agriculture with funding supports from the MacArthur Foundation and the Bhutan Trust Fund for Environmental Conservation. The institute was then named the Ugyen Wangchuck Institute of Forestry and Environmental Studies (UWIFES), and its founding goal was to provide world-class training and education in the field of forestry and environmental studies. With the establishment of the institute, the erstwhile Bhutan Forestry Institute at Taba which used to train Forest Guards was dissolved and the Forest Guard training programmes (Certificate in Forestry - 1 year) was undertaken by the institute at Lamai Goempa, Bumthang since June 2008. The institute was supposed to take over the training of Forest Rangers (Diploma in Forestry - 2 years) from the erstwhile Natural Resources Training Institute (NRTI) in Lobesa. This did not happen due to many reasons, including the upgradation of the NRTI to the College of Natural Resources and its integration into the Royal University of Bhutan. The institute was known as Ugyen Wangchuck Environmental and Forestry Institute (UWEFI) from 2006 to 2009. 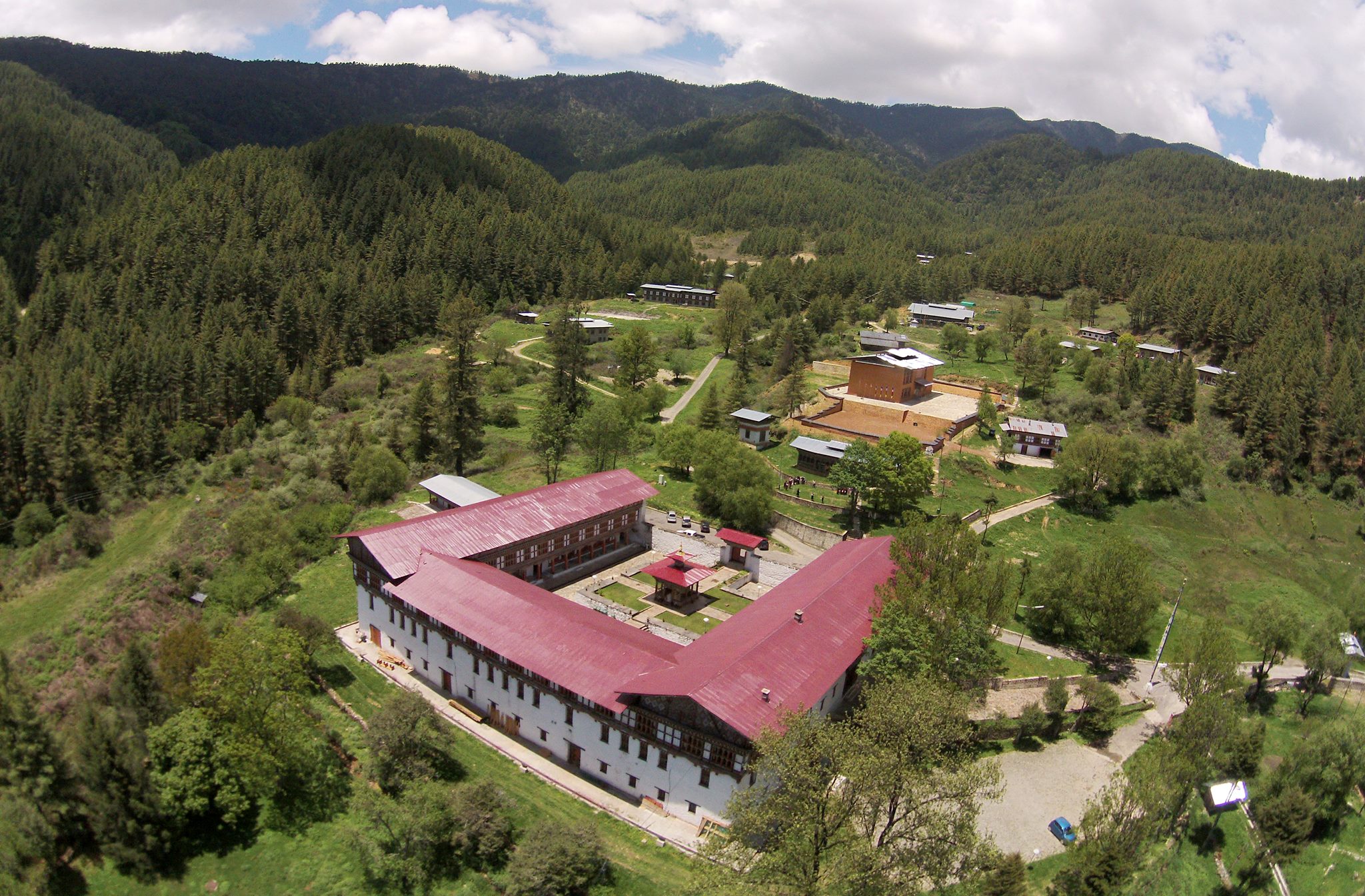 The institute went through several major reforms and transformations a few years after its establishment. One major restructuring occurred as per the directives of the 33rd Session of the Lhengye Zhungtshog held on 10th March 2009 that: 1) the institute should host the centers on water resource management, eco-tourism and indigenous knowledge on plants and animals; 2) Bhutan is to become a moral authority in the area of environment and to provide leadership in it internationally; and 3) form a Board of Advisors with a Chairman for the institute and submit to Lhengye Zhungtshog. In pursuit of the cabinet directives, the institute was renamed as the Ugyen Wangchuck Institute for Conservation and Environment (UWICE) with the goals to: 1) contribute to science and knowledge by conducting research and policy analyses in relevant problem areas; 2) mainstream scientific research findings into environmental policy and decision-making processes; and 3) train current and future generation of conservation and environmental leaders, practitioners and academics. The institute was governed by a board of governors chaired by the Prime Minister with Minister of the Ministry of Agriculture and Forests (MoAF) as the Vice Chairman, as per the decision of the 40th Session of the Lhengye Zhungtshog held on 5th May 2009. The first board meeting was held at the MoAF conference hall of the on 22nd April 2011, during which the institute's proposed organogram was approved and it was to be headed by a Director at an EX 3 level. The second board meeting held on 29th April 2012 at the MoAF Conference hall directed the institute to transition to an autonomous agency and to gradually develop into an international NGO focusing on conservation and environmental research. A penal of external advisors were also nominated and endorsed by the board. In pursuance to the board's directives, the MoAF Secretary wrote to the Attorney General (vide letter no Sec/MoAF/72/29 dated 1st February 2012) to seek legal opinion on the appropriateness of transition to an autonomous agencies to which the Office of the Attorney General (OAG) responded positively (vide letter no. OAG/LSD/1026 dated 2nd March 2012). Then in 2016, the institute underwent another round of reformation as a result of a major restructuring initiated by the Royal Civil Service Commission (RCSC) after a comprehensive organizational development exercise within the civil service machinery. As per the decisions of the 85th Meeting of the Royal Civil Service Commission held on 29th November 2016 and 89th Commission Meeting held on 10th January 2017, conveyed by the Director of RCSC (vide letter no. RCSC/HRMD/7/2017/2253 dated 11th January 2017), the institute was renamed as the Ugyen Wangchuck Institute for Conservation and Environment Research (UWICER) with the explicit mandate to carry out researches related to forestry and environment in addition to training of foresters and forestry professionals. The institute is to be headed by an Executive Specialist III (ES 3) or above and it is to have three centers which are to be headed by P1 or above (specialists with management responsibility). The institute went through a final round of transformation with the establishment of the Global Tiger Center and subsequent delinking of the Bhutan Tiger Research Sub-Center (Manas) as decided during the 142nd Commission Meeting of the RCSC held on 7th August 2018.

Know More About Us